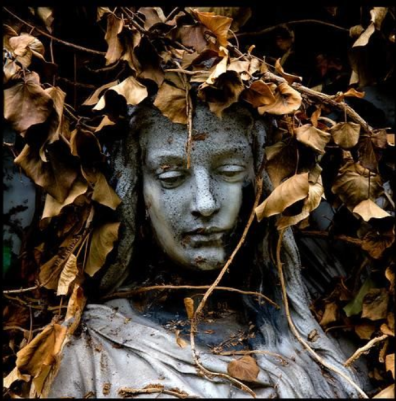 With Halloween just a few days away, thoughts turn to the dead. And when I turn to the dead, I look no further than the backyard of Paramount Studios over at our friendly neighbor The Hollywood Forever Cemetery. It’s the final resting place for Hollywood legends and entertainers alike. The vacated remains of Cecil B. DeMille, Don Adams, Valentino, Douglas Fairbanks, Mickey Rooney, Dee Dee Ramone (“I gotta go now…”) and Johnny Ramone. Apparently, Morrissey wants to be buried there.  I spent a lunch hour several months ago walking through the grounds.  I marveled at the mausoleum filled with dead actors with jaunty epitaphs. “Leave me alone, I’m sleeping” (Joan Hackett) and felt the chill given off by the very solid marble walls were everyone is interred. Not to be disrespective, but considering the lives that were once lead, laying behind those walls – well, there must be a hell of a party going on in there.

As I wandered around this strange and final resting place, an overwhelming sense of sadness came over me. It permeated the air. Perhaps I’m sensitive to it, but I could feel the sorrow of families and the many people who’ve come here to say goodbye. Perhaps I was feeling the melancholia of those who lay in graves below? There were so many of them. And not only famous people. A large Russian community exists in Los Angeles. When their loved one dies, they bring them to Hollywood Forever. Stacks and stacks of graves stones with ghostly in scripted likeness of their grandmothers and grandfathers, uncles and aunts. Some were young a pretty, others were dour and a little frightening. Their faces rise one above the other like a sea of ghosts. Russian. Many who look like Bresniv. Hopefully, they all rest in peace – and not get too bothered by the movies and concerts that are given on the grounds. 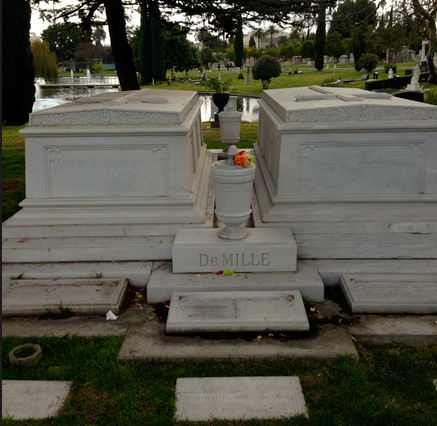 I’m ready for my close up. Guess I’m too late.

And speaking of party – there ain’t no party like a Day of the Dead party ’cause the Día de Muertos party don’t stop – until November 1st ends. The day after Halloween is the Day of the Dead, a major holiday that takes place more here on the west coast, me thinks. I can’t recall ever doing it up that mightily in New York since the Mexican population isn’t as big as it is here. Dia de Muertos is a gorgeous, spooky, creepy celebration – the Hollywood Forever is the place to be for people with painted skeleton faces. Me? I’ll be at home recovering from my Snickers induced coma.

Even though the Hollywood Forever Cemetery is right behind the place where I work, it’s unlikely I will spend my lunch hours dwelling within the crowded grounds, marked with mostly Russian gravestones with engraved faces peering at me disdainfully as if I don’t belong. (Not yet, anyway – but I’m not going to be buried – I’m going to be cremated and have my ashes scattered in the same bay in Sag Harbor where we laid my parents ashes. No dark, creepy cemetery for eternity for this moi).  The place was peaceful but disturbing. As much as I love the macabre and the sweet, strange morbidity of death, trodding around these grounds made me feel disrespectful. And very sad. 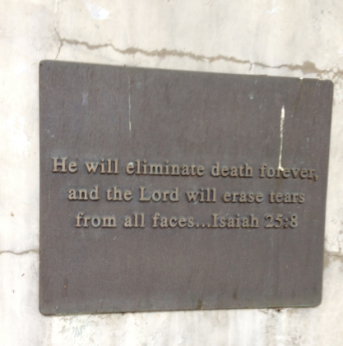