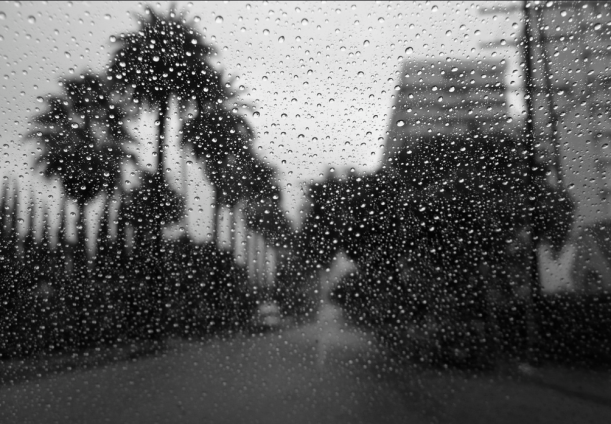 Thank you Nik Adler/Flickr whose photo I’m borrowing from -> https://www.flickr.com/photos/whoshotya/4012882645/in/photostream/

It rained last night in Los Angeles, one of the first good, soaking rains the metropolis has had in two years. The air is now fresh and crisp, letting autumn in after a dry, stagnant and dusty spell – summer needed to be washed away once and for all.

Before I moved to Southern California, I was like many non-west coasters mocking Los Angelenos who freaked out over a few rain drops spilling from the sky. But, now that I’ve lived here a few years, I can attest to the over-the-top reaction. The terror is justified.

“It never rains in California, but girl, don’t they warn ya – it POURS…man, it POURS.” I will follow that with a wholehearted “AMEN”.

It hardly rains here in L.A. There is a rainy season in December through February, but with the current drought, it’s hard to call it that now. When the skies do open up (as they did when I first moved here four years ago – I mean – wow – it just rained constantly in late 2010-2011), it’s in torrents of water that never seems to stop. The roads are not ready for the rain. The drainage can’t capture the gallons of gushing stuff, backing up sewer systems, making lakes out of streets. And then guess what you have? Traffic. Traffic upon traffic that is already a horrible traffic jam before the first drop even fell.

Can I be frank? There are a lot of people in L.A. who can’t drive for shit. Sorry – L.A’-ers reading this. It’s likely not you. But adding to the strange fact that drivers here don’t use their signals and like to race alongside your car so they can pass you (because screw you – you’re not going to be ahead of them), people kind of don’t know how to drive in the rain here. They speed down the street fancy free – like they’re going to the beach on a summer’s day, not believing the streets are slick and that a three foot, ten yard wide puddle is coming up hard and fast. Then it’s hydroplane time…tidal waves of water splashed about endangering the passengers of other vehicles, as the dare-devil in the 1997 Honda Civic with the jazzed up engine, takes a spin.

But let’s back it up to the first problem. The dry, oily roads that have baked in the sun for months and months between showers, making the roads slippery with the first light layer of rain drops. When you move here and take the written test at the DMV for your new license, you learn from the handbook that you must drive slow when the first rain falls because the streets can be perilous, causing accidents and then…traffic from hell.

Then, you have the strange firmament of electric transponders in Los Angeles older than the day Claudette Colbert came to town. They’re so fragile, a simple wind, much less an ocean of water dumping on the local power station will cause black outs at any moment – in any given radius of neighborhood blocks, taking with it – traffic lights that don’t work. You know what that means? TRAFFIC. SLOW. TRAFFIC – as four way intersections are a free for all and everyone has to do the “right of way” thing. If you’re one of the unlucky neighborhoods without power…good luck. It may be a few hours or a few days before you see light again, as you watch a freezer full of food turn to rotting, dripping wasted bags of money and your home turns into a new version of 1900 House, where you have to look up how to make dinner out of mushy meat. Oh, that’s right – you can’t because the internet can’t happen without electricity.

So, as a New Yorker who rolled her eyes at Los Angeles’ terror of rain, I take my hat off to you with apologies. Yes, we have blizzards that will paralyze a populace for days, and cold that will turn your appendages blue until the April thaw, but all factors that tie into Los Angeles’ famous perfect weather, is exactly what makes rain dangerous here.

But, I still laugh at news people on television who are on the scene somewhere in Silver Lake showing raindrops on a puddle and freaking out like it’s Hurricane Sandy.