Just had to sing some praises! (Despite the fact the coma on my keyboard isn’t working. Pardon the dashes!)

‘Daddy Long Legs’ is the little show that could. It just celebrated 200 performances at the Davenport Theater!

If you’re in the NYC area – spend a matinee or evening with this lovely story filled with heartbreaking and life affirming beauty. Plus – real married couple and stars Megan McGinnis and Adam Halpin are a couple of cuties. Lovely all around!

Because I am slightly obsessed and love to champion good creative work -the producer’s team kindly gave me a discount coupon to share with family and friends. Please click through and grab a seat or two!

We all love a good story. Storytelling allows us to feel grounded with humanity, and can be a catalyst for growth. As I develop ‘The Good Write’ into a platform to help coach writers and to develop tools to help write their own tale, I  will continue to be a bullhorn for great storytelling and to encourage writers to get their ideas out on paper for the world to see.

As some of my readers may already know, I’m a very big fan of the lovely and charming off-Broadway show ‘Daddy Long Legs’, a musical that is storytelling at its finest,  beautifully and intimately told through letter writing,  gorgeous melodic music and divine performance.

Back in October, I had the opportunity to see it at the Davenport Theater and was captivated by its charm.

Furthermore, back in December of 2015, the show was also the first theater performance streamed live on the internet. It’s the little show that has created major ripples in the digital and theatrical universe.

I love to champion a production that deserves recognition. That is why I’m honored to provide a opportunity for you to see it with your family and friends at a discount price.

Please click on this link to claim your tickets ->

You can also go directly to www.telechargeoffers.com and use the promotion code DLLDEBI to purchase your discount tickets.

The secret to happiness are many things. If you live in the NYC area or plan on visiting, please go see this lovely cast at The Davenport Theater on West 45th street and find a pocket of happiness . You may want to write a letter about it!

And when you do, please let me know about it here or email at drotmil@gmail.com. 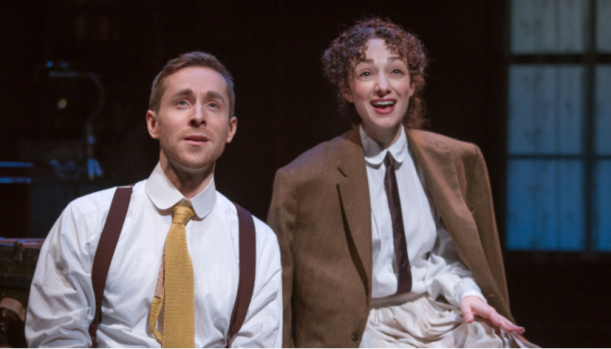 I am absolutely smitten this morning. Smitten with technology and live performance converging into new ways of bringing theater into the comfort and convenience of your own home.

Last night (depending on where you live), the off-Broadway show ‘Daddy Long Legs’ streamed a live performance straight from the Davenport Theater in New York City. The show stars real life (and adorable) husband and wife Megan McGinnis and Adam Halpin who are just damn delightful.

As a New Yorker living on the west coast, it’s difficult for me to make it back to see shows. Although I did see this wonderful performance just a month and a half ago on my whirlwind ‘World Series Halloween Marathon’ weekend, there are many shows I wanted to see that were unaffordable, sold out or did not have time for, such as  ‘Something Rotten’, ‘An American in Paris’ and ‘Hamilton’ (cough…cough..sold out until the sun becomes extinct).

Sadly, as with the case of 2006’s ‘Sweeney Todd’, a superb show I allowed to pass me by, so many great performances close and thousands of hopefuls with no access to New York Public Library’s Lincoln Center Branch’s Broadway video archives, never get to see them. Instead, they are tempted to view them on bootlegs via YouTube, where one feels dirty watching an illegal cut, shot through someone’s coat buttonhole. (I imagine the hateful glare of Patti LuPone on my shoulder as she watches me watch her duet with Michael Cerveris on “A Little Priest”,  recorded on a jiggly Flip camera one hundred feet from  stage.)

Yes, a cast recording is very nice, but how great would it be to see a staged show recorded for posterity? They did it with Sondheim. They did it with ‘Elaine Stritch Live at Liberty’. The National Theater in London has been doing NTLive for a while now, where Hamlet with Benedict Cumberbatch was just recently seen in select movie theaters. Network television is redefining the live staged experience by broadcasting  ‘Sound of Music’ and ‘The Wiz’ live, the ‘Grease’ to follow on Fox.

But for actual off/on Broadway shows – think of the coverage. Think of the continuous revenue flow that will continue to contribute to a show’s ledger long after it has closed. Think of how amazing it would be to see ‘Fun Home’ or ‘An American in Paris’ in your pajamas when you are never going to get to New York in that season?

Some purists scoff at the idea of digitally streamed Broadway. Being in a theater and feeling the energy come off the stage as you join hundreds of other people watching the same story unfold before you is a magical experience. The smell of the plush seats, the greasepaint, the velvet ropes and hushed or crackling energy you feel from actors breathing the same air.

But let’s face it, for those who can’t afford this experience, seeing in the comfort of your own home for a nominal fee is better than not seeing it at all.

Ken Davenport, Producer of ‘Daddy Long Legs’ and owner of The Davenport Theater, where the show lives, is a staunch supporter of bringing live Broadway to the 21st Century by use of streaming technology. He facilitated, along with BroadwayHD, the debut of last night’s streaming of ‘Daddy Long Leg’, and it was indeed a major breakthrough, a step in the right digital direction. Twitter was alive with “Daddy”. The hastag #DaddyLongLegsLive was trending nationally on Twitter and commentary, weighing both pros and cons, were bandied about on the internet. Imagine an SVOD platform to house these live shows…

Thanks to BroadwayHD, a new Netflix type company created by Broadway producers Stewart F. Lane and Bonnie Comley, live streaming Broadway is slowly becoming real and lucrative. The fledgling company has already acquired 100 titles to stream on their SVOD platform.  Not all titles are new nor particularly desirable. Most are already available on DVD and other online sources, but it’s a solid start.Remember iTunes and Netflix started out with limited supply and built their library over time.

Once Broadway understands the need for digital streaming, there will be more fresh material to subscribe to, making this venture a successful one to Broadway nerds out there.