‘Hitting Water: A Book of Stories” to be published December 2014

The final proofs are in! My forthcoming book “Hitting Water” is finished and ready for publication. It looks amazing! I’m so proud of these short stories about the brevity of life and how we embrace the people – flawed and all – who enter it. It’s a small book, but it packs a punch.

Maybe you are a writer and can’t find the time to write. Are you a writer who feels they have a book in them?  Do you have a day job that takes up your time, yet makes you feel too  exhausted at the end of the day to sit and write? That was me. I was the person who always wrote articles on blogs and hoped to have someone notice my work and give me a publishing deal. I’m one of many who felt they had a novel in them, but pushed it aside out of fear. Laziness, perhaps – but in essence, Laziness equals Fear. But I learned it doesn’t work that way. So, there I was, a writer who didn’t write. A writer with a day job in the media that was really dead end, where I would just go home, go to sleep and wake up again to a job that wasn’t even paying bills. You become dead after a while. However, to be fair,  I work at a film/television studio in Los Angeles. I’m so lucky because my bosses are fine with me writing when I have down time, Yet, there are busy days where I steal away during lunch to write, or create notes after work for the next day. You do what you can. It’s so satisfying to accomplish the goal a little every day. Then when you see writers publish books or get an article in The New Yorker, you’ll no longer feel the creeping icky feeling of jealousy, like I did. You’ll no longer feel anger because you know you can write, but don’t even try – because now – you are trying. You’re a writer writing! Best feeling in the world!

How did I get out of my writer’s funk? After having a major medical ordeal that made me re-think my life, I felt that 2014 was going to be different. This was the first year where I made a New Years resolution and stuck with it. I would write at least 500 – 1000 words each day.  And I did it.   I did it because I was tried of relying on a corporate job to allow me to exist. I was tired of letting my personal ability to create go to waste when I knew I could make it into something real. I don’t expect to be a millionaire here, but I don’t expect anything really. Who knows? How exciting to stimulate the universe and generate the energy flow toward a goal. How exciting to see where it will take me!

I hope “Hitting Water” will inspire people like me, who didn’t think they could ever get their writing in gear and publish – even self publish –  to get down to business and do it.  It can be fun! It’s daydreaming made real! You place yourself in imaginary worlds that come from you, allowing others to read and share your vision. I love that. I hope others with aspirations to see their writing materialize will be inspired by this book and the writer behind it.  “Hitting Water”may not change the world (yet), but it’s changing mine in so many ways.

I’ll be uploading the final version of the completed cover this week, prompting Amazon to provide me with a publishing date. “Hitting Water” will also be on Kindle as well. So, watch this space for the official release date.

The way things are going, it looks like the book may come out on the week of my birthday. What a lovely thing!! 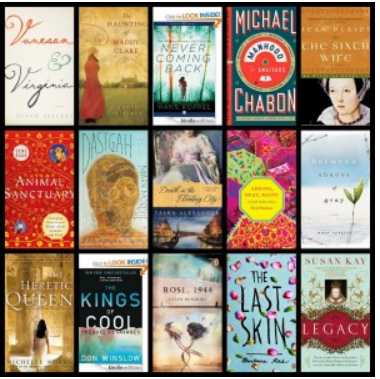 Even though the digital world has given us Kindle and iBook apps, I still do love to read actual books.  You know what I mean – tangible books with paper you feel and pages you turn. Paper that has the lovely smell of knowledge and stories,  tinged with the musty comforting fragrance of a library. Yes -books. And as a book reader who has mulled over the aisle of many Barnes and Nobles, I am captivated by the lure of a great book cover. The old adage “Never judge a book…”? Well, I do. To me, the cover is part of the package. The photo or design usually expresses a subtext undertone of the book’s story, giving the potential reader a feel for the mood. Surrealism always entices me, and it seems the literary world knows how to use dreamy imagery well since I find stacks of book on my shelves dressed up with sepia toned oceans, blue hued dreamy roads to nowhere, pithy minimalistic cocktail glasses in the middle of a spill, suspended in mid-air. I’m still trying to understand the imagery of David Sedaris’ “Barrel Fever” with two guys sticking in hats sticking their tongues out the reader. But no matter – I find it whimsical, playful, iconoclastic – very much like the contents inside.

So, as a self publishing author, I’ve found it important to know what my book is about before getting to the cover.  I’m very visual, and no ordinary photo will do.  So, I finally found the perfect photo off Shutterstock, but the dpi and the various elements in the shot were difficult to maneuver, that is – until I found an actual, affordable book cover artist who’s on the same page, and was able to make the cover into what I wanted – with all requirements included. This is such a relief. My self imposed deadline is approaches. My manuscript finished, with the exception of trying to come up with an introduction and blurb. But I find it so hard to promote myself. It seems that when I’m about to reach the precipice of accomplishment, I slow down -like I don’t want it all at once.

I’m also in the self doubt phase. My book is entitled “Hitting the Water” – but should I have just called it “Hitting Water”? Would that have been snazzier? Too late now since I’ve already received an ISBN. More questions. More answers. More self doubts. More ways to get past them.  And as much as I love physical books, I plan on having my book available for Kindle in addition to a real book.  The best of both worlds.