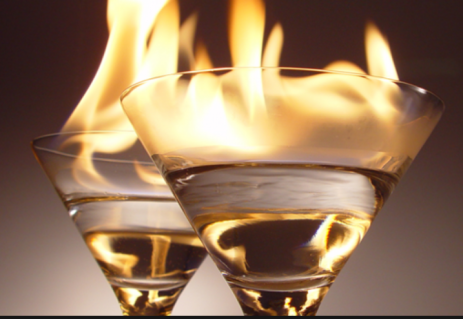 My father was a nightly martini swiller. Beefeater gin was his poison. A splash of dry vermouth in a shaker with a slice of lemon, and he could settle down after a day at his office at IBM – old “Big Blue”- to the mono voice of Walter Cronkite. One drink a day – and that was it.  He coined it his daily “Zoomph”. I never saw him drunk – only content.  It wasn’t until a stroke at the age of 80 took his desire for a daily “Zoomph” away. Concerned about the interaction of pills and alcohol, he called it a day.

Forever my father’s daughter, I carried out the love for the great martini. However, as times moved on, I changed the gin for vodka. The lovely warm rush of alcohol through my veins would ease the stress after a long, hard day. I wasn’t a daily drinker – I’m still not. Although drinking at a lovely Manhattan bar after a long day at work can sink me into a delicious drunken funk, booze at home can make me groggy and slow. A few sips make me sleep, makes the precious few hours I have left before bedtime go to waste. But a nice stiff drink, at the right place and time is an elixir that softens the blow of daily life with a sharp sting of fluid going down the gullet.

The drink helped me the day my mom died. It all happened so fast. I had been talking to my father on the phone that morning.  Some background: They both fell ill together – both committed to long term nursing at the same time. They were both living in the same room.  Although I visited them as much as I could, as a single person who had to make a living, my weeks were spent doing just that – working. Trying hard not to get fired because of the sudden leaves of absence I’d have to take when my parents took a turn for the worse.

On this day, I had just signed the lease to an apartment on the upper east side and wanted to call my dad to tell him the news. Normalcy. I just wanted to bring normal life into his ear. While talking to him, I could hear my mother in the background – in the bed next to him.

“Ann, Debi just signed a lease to an apartment!” he shouted to her.

I only heard her voice. Any words uttered were indistinguishable.

Then, after chatting with my father, we said goodbye.

My next call was about two hours later, when the nurse from the home called to say my mother’s blood pressure was crashing, and they were taking her to the hospital.

I told my boss, who knew of my parents decline, that I think this was it. I had to go.

I boarded the Metro North train to White Plains. Sitting in a daze, knowing that the one thing I had feared since I was a child old enough to know death, was actually coming true. The one person who had been in my life since I was a zygote – was leaving this planet. Life as I knew it before – was gone. Changing. Never the same again.

We went through the underground tunnel that rolls underneath upper Manhattan, and comes up for air near 125th street, where train rolls and dips over an El line within Harlem, then over the East River. You can see Yankee Stadium in the distance. Then, the train pitches and shakes over the Major Deegan until you continue your journey to the suburbs of NYC.  The phone calls must have come when I was in the Grand Central tunnel,  void of any cell phone signals. I must have been at Marble Hill in the Bronx when I saw the voicemail icons pop up. One voicemail from my half brother. One from my uncle. The hospital couldn’t reach me – so they called the next two numbers on the contact sheet – my brother and then my uncle.

I found out my mother died while on the 5:20pm train to White Plains.

The next few days were surreal. I stayed in their condo, the one I had to sell for estate matters. My friend Marie came by with a lasagna. I handled estate issues by phone, and lawyer meetings. The funeral director was young, kind and understanding. My Miami relatives were alarmed. I had my mother cremated – and you don’t do that in the jewish religion.  Then, there was suspicion – because she had been cremated so fast. Like I was trying to hide some weird plot that lead to the death of my mother. Family things. You know.

The one thing I remember was drinking vodka all day. Not martinis – straight vodka. Martini’s require preparation, anticipation of the swilling cocktail hour celebrating the end of the day. No. This was straight up vodka. I sipped it slowly, an oral dose administered methodically.  It started in the morning and flowed through the rest of the day. It lulled me into a cushion of comfort, easing the cutting edge of pain in a medicinal manner.   It continued for a few days, as we arranged memorials and planned. I lived in the sleepy haze of booze until I didn’t need it anymore. Like my dad no longer needed his daily  “Zoomph” – I woke up from the funk and ended my need for the devil’s drink, as they say.  My dad passed away nine months later, and the vodka medicine began again until I no longer needed it.

Today, without my dad around, I don’t enjoy martinis the way I used to. Vodka makes me feel ill and sleepy. The sting of the hooch doesn’t thrill me anymore.