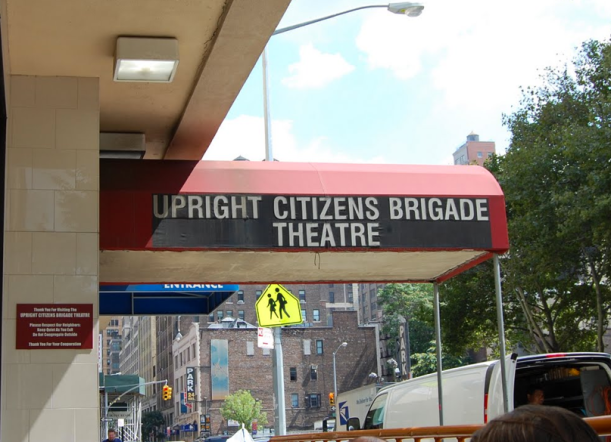 I was listening to The Nerdist podcast, hosted by Chris Hardwicke this morning. The guest was John Cleese, whose account of life seems full of spiritual vision now that he’s 75 years old. The concept of why we need comedy came up. After all, as Mr. Cleese professed, “I didn’t cure cancer”. So why the bowing down to this Python great? The accolades? Why should he feel so accomplished? The conversation quickly steered (thanks to Chris) to the fact that comedy makes human beings, struggling through the horrors of this world, happy. Laughter makes life tolerable. It puts a smile on your face, and allows you to push through the terror without always needing to medicate, drink or smoke weed to get you through. (Although, those things do tend to help – in moderation.)

It’s true. Comedy does help the human spirit march on, especially when one is faced with tremendous, harrowing challenges. That is when, at the age of 46, I became a member of the Upright Citizen Brigade training center as an improv student. 46 years old. The one person in a sea of late teens, 20’s and 30-somethings, all welcoming me with open arms as I left my temporary home filled with despair and illness to spend Sunday afternoons of “zip, zop, zap”, trust games, listening training, eye contact and just having a blast while finding “The Game”. All in the name of “Yes, And…”

It seems the founders, as much as I love them, have their heads up their asses when it comes to understanding HOW MUCH THEY AFFECT THE LIVES OF PEOPLE. I say this in caps because in the accolades and the network deals and the sitcom successes and failures Matt Besser, Matt Walsh, Ian Roberts and Amy Poehler have see their graduates pursue – there are regular people who immerse themselves in the UCB culture – not so they’d be discovered by Tina Fey or Lorne Michaels. They did it because their lives sucked at the time, and they needed to participate in the welcoming, comforting hand of comedy in order to get through their despair.

The phrase “comedy nerd” has become incredibly cliche, but I can’t avoid the fact that I have been a comedy nerd since the day I discovered “SCTV” and “Saturday Night Live” (the original) in the mid-70’s. I was about 10 years old. I wanted to be Gilda. I crushed hard for Bill Murray. In New York, “SCTV” used to air at 11pm on Saturday nights on Channel 9 – which gave me a comedy appetizer before SNL started on the other side of the dial on NBC. (Yes…the dial). Catherine O’Hara and Andrea Martin were my goddesses. I wanted to invite Gilda to my pretend tea party and laugh over bits with my two new make believe Canadian comedian friends.

As SNL continued, I fell in love with Monty Python, taping every episode that aired on MTV, memorizing bits, worshipping these men like The Beatles, with Michael Palin my fave.

Then, the floodgates opened. The HA! Channel started up on cable, and I could see Python and stand up and various funny people until my eyes watered. “Whose Line Is It Anyway” came directly from Britain, and it wasn’t long before I knew the names of Stephen Fry, Tony Slattery, Josie Lawrence, John Sessions or Colin Maukery. “French And Saunders” was another revelation, straight from England, these two hilarious ladies cut a swath through all boys comedy with goofiness and deep hilarity.

I even went to London on various trips and saw a taping of “A Bit of Fry and Laurie”, plus I went to see The Comedy Store Players on Leistershire Square. Back home, I was a fanatic of “Late Night With David Letterman” and “The Tonight Show with Johnny Carson”. When I was in college, I used to get tickets every month to see Letterman at NBC. Alan Havey had a terrific talkshow on HA! (the channel would become Comedy Central) called “Night after Night” that became an addiction.

So, in the world of alternative comedy, my age has allowed me a long, earned history of loving comedy since I was a babe.

I used to walk past the old UCB theatre on West 22nd street while going to my job on west 18th. I always meant to go in, but never did – not until 2009 after they moved to West 26th. I saw “Let’s Have a Ball”, a Saturday night show featuring Kay Cannon and Scott Adsit – two members of “30 Rock’s” crew. After that show, I was hooked. The warm, cosy, intimate space reminded me of the furnished basement in my childhood home. The interaction, the beauty of the improv, the structure and pace. I was done for – watching the bare bones of comedy. This is the kitchen of funny. This is how Del Close- who trained the minds of John Belushi, Mike Myers, Bill Murray and Gilda created the kind of comedy I’ve devoured all my life. It was all cooking down there, in the basement of a Gristedes supermarket with pipes that dripped and a mildew odor that smelled like my dad’s old bar downstairs near the washroom. Home. I was home.

I am the only child of two parents, who by 2009 were both in failing health. My dad had a stroke two days after Christmas in 2006. The next few years were spent in sheer terror of losing my father, fighting insurance companies that refused to pay for his sub-accute nursing, all while trying to maintain my job at the New York Times. It devastated my mother and me. After a few stints in nursing homes, my dad came back to his condo, where my mother cared for him. However, in time, she became quite ill herself. She refused medical treatment, and refused my help. During this time, I moved in with them temporarily to assist when I could. But it was a depressing home. 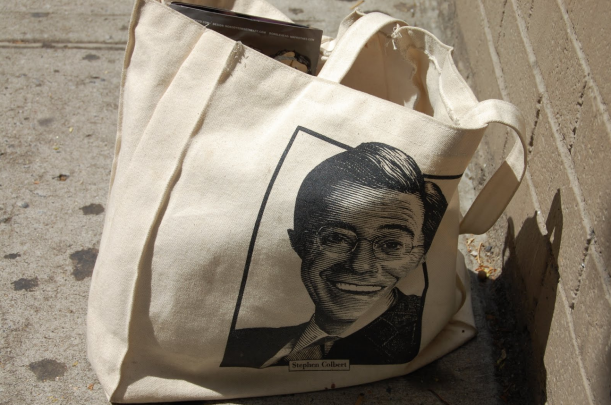 On line at the Del Close Marathon, August 2009. Photo by Debi Rotmil.

In August of 2009, I spent a weekend in Manhattan to attend the Del Close Marathon. It was there that I had a life changing experience. Non-stop comedy. Gonzo crazy bozo ass comedy all in the name of Mr. Close and his spirit. I spent the weekend watching – in close quarters and in front rows – Jack McBrayer, Rob Huebel, Paul Scheer, Jason Mantzoukas, Scott Adsit, Nick Kroll, Bobby Moynihan, Shasheer Zamatta, Horatio Sanz, Sarah Silverman, Brett Gelman and so many rising new comedians, who went crazy for about 54 hours straight of insane mondo improv comedy. If you don’t know these names – look them up. You will recognize them in shows like “Transparent”, “The Office”, “30 Rock”, “The League”, “Marry Me”, “Community”, “Happy Endings”, “The Mindy Project”, “New Girl”and in films like “The Descendants”, “Piranha”, “The Dictator”.

During that weekend, I waited on lines and met young people who were students of the UCB training center. The discussion often turned to why they were there, and why they were taking improv classes. One girl told me it was because she left her family home due to abuse, and was never allowed to come back. She found a home in improv theater, with supportive friends who were better than her own family. Another girl told me she was taking puppet improv, and found solace creating characters in this medium after her little sister was killed in an accident. I was in my mid-40’s. I wasn’t married. (Still not.) I didn’t have kids. (Still don’t.) But I had two parents dealing with the end of their lives, and I had to come home to that everyday. These young people saw me – this older lady – and THEY encouraged me to join improv, get into a class – lose myself.

And so I did. I started level 101 Improv with Rebecca Drysdale (“Key and Peele”, “Orange is the New Black”), where I became friends with a group of supportive, funny people who were all learning how to step up and create stories on their feet. We did monologues. We played tag outs. We played classic improv games. We performed on the stage at UCBNYC. We became members of this society. I continued to level 201 where I kept learning process – this time with edits, beats, analogous take overs. It was a relief to leave the sadness of my parents dark home – the fading embers of their life where I feared their impending deaths, where I couldn’t face their weaknesses, and where I always felt I failed them during this time. UCB was my haven. I was able to take the train from White Plains, and as the train cars moved closer to Grand Central, the worries faded until I got to the training center and started becoming someone else, thinking on my feet, writing in the now. We, as student, were required to go to shows. No problem! Then we’d connect the next weekend in class about what we saw, the techniques of an Asssscat, or how he structure of Kay Cannon’s scene at “Let’s Have A Ball” was similar to what we learned a few weeks before.

After years of SCTV, SNL, Monty Python, Letterman, Carson, Whose Line, The Comedy Store Players and UCB shows, I was finally inside comedy, cooking with the ingredients I had often seen. It was a revelation.

I was going to continue on to level 301 (I did receive approval to move on to the next phase), but sometime after I completed level 101, my mother died. I continued on to 201 to try and find the laughter in life and immerse myself with new classmates and scene partners. Then, my dad died after I completed level 201. Suddenly, my energy and desire to go into classes had waned. By now, I was back living in NYC, but I never did continue. Yet, I kept going to shows – until I moved to LA, where I grew tired of the disconnected irony and the easy dick jokes, and the boys club, and the spotty somewhat cute boy comedians talk about their crappy relationships with woman who were clearly out of their league. I got tired of waiting in crowded lines for shows, getting bumped off the street curb by young UCBLA improv students were were doing casual bits and trying to out-funny each other. I caught myself thinking – doesn’t anyone want to be a doctor around here? We could sure use a few of those in the world. There are enough improvisers to go around. Suddenly, I felt a little too old for this gig.

But in the end, UCB saved my life. It allowed me to smile when things were dismal. I only wish Amy Poehler and the founders I admire so well could understand how their venture isn’t only for young people who are trying to be the next John Mulaney or Kate McKinnon. It’s also for someone nearing AARP age who really needed a good soulful laugh to make it through.

Some of my writing from TVBlogster, my old comedy blog about the Upright Citizens Brigade. Plus coverage of the Del Close Marathons I’ve attended: