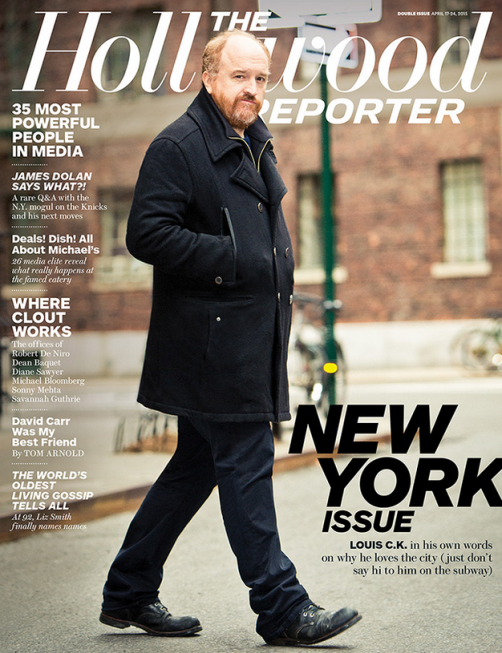 Right now, I’m sitting in the heart of Hollywood, in the middle of one of the most storied studios in Los Angeles, taking a break from a morning deluge of work. The latest edition of the Hollywood Reporter is on my desk – the New York Issue. Just seeing it makes my heart ache.  Louis CK is on the cover, the consummate poster boy of New York entertainment. Receding red hair, bundled in a black coat, the photo shows him crossing a Manhattan street, looking at the camera with a stoic CK smirk – as if he’s saying, “Yup. I’m home. I belong here.”

The entire issue is a portfolio of famous New York talent and creators who’ve chosen to stay in the Big Apple over moving to the drought stricken sunny land of Los Angeles. They’ll endure the constant barrage of horrendous winter weather and frigid cold temps to stay where the rubber meets the road, where the energy of NYC lives in their blood. Even though I left for warmer climes – I don’t blame them.

I was in love with New York City all my adult life. I grew up in what they call a “bedroom community or suburb” of New York City. Westchester County.  When I was a child, New York City was bankrupt, crime was everywhere, and you couldn’t go into town without some scary dude trying to squeegee your windshield while you were held prisoner at a stop light. It was bedraggled, dirty and mean. It scared the hell out of me. But it was thrilling. Especially when I reached high school and was old enought to train it down with my friends Gina and Laura so we could walk Greenwich Village and absorb the funk coolness of it all.

Still, New York City was the heartbeat of my town. You could feel its pull. It was palpable – that living, breathing organism of energy sizzled twenty minutes south. The gritty streets. The cool and scary people. The humming of Time Square. Broadway. Media. Food. Art. Knowledge. Many people feel this. Ricky Gervais has often mentioned that when he comes to New York (he’s made it his second home), he always feels a catch in his throat. It’s visceral. Perhaps the Native Americans who first inhabited the island placed a spiritual blessing on the place, ultimately making it the touchstone for many wayward people. The hearth where distant travelers come to find a new life of peace and freedom. “Give me your tired, your poor”. The place where artists long to create, or the weary find solace in its crumbling buildings.  It’s like a calm in the midst of a global storm. The vortex or force field to where everyone eventually gravitates, until it sucks them in, saps their energy, and spits them out.

Then you fall out of love with New York.

Being inside the energy field of New York City makes one realize that the awesome thrill is good in doses.

When you’re young, you come to New York City to have your New York City days. Not many people stay. They marry or grow up a little and move on to spacious homesteads. Only the very wealthy or well tuned New Yorker stays a lifetime. But when you’re the intrepid NY dweller, you tend to leave.  You’ve had enough of scraping by in a studio apartment – or slumming with roommates.

The high rent. The small apartments. You sacrificed space and civility to have your own spot on the island – where you “stuff” is – where you lay your head. You got into the groove – as you make your way through the masses, getting so good in catching the subway, you time the rumble of a distant train perfectly as you run down the stairs, add money to your Metrocard in time to jump on the train moments before the doors slide shut. But you get to a point when you want your own space when you travel. You’re tired of breathing a stranger’s breath.

I fell out of love with NYC several years ago when I couldn’t stand waiting for the 6 Train anymore. I fell out of love when CBGB’s closed and The Bottom Line shut down. The energy of NYC that once filled me up with positivity – got to me. It was in my face everyday – from the moment I walked out the door. I’d step on the sidewalk to join the parade of pedestrians walking from York to Lexington just to get the train. I was just another ant marching.

I used to leave NYC on weekends and head to my folks house up in Rockland County, and then again in Westchester when they moved back. They both passed away within the same year, and the virtual umbilical cord from NYC to the leafy homestead up north was now severed. No more breathers from the stifling New York existence.  No more home cooked meals and family connection. I was free to the wind, but left with no outlet out of the city.

I needed green patches of peace – where I could swing my arms around and not hit a wall or knock off a book from a shelf. Space.  I wanted space. I wanted sunshine. I wanted…no more winters. I wanted more than just one room to live in.

I fell in love with Los Angeles. The comedy scene, the media, the hullabaloo, the underground world of vintage bohemian beauty hidden away from the glitz of Kardashian type shallowness. There’s a ragged beauty to LA that you really fall in love with.

It’s been almost five years, and my life in Los Angeles has been a remarkable one. I’ve worked for an entertainment database company – then for an Oscar/Emmy nominated production company – temped at a major studio in Culver City – and now at this amazing studio in the heart of Hollywoodland. I have a gorgeous hound who makes my heart sing. I’ve made friends with more neighbors  than I ever did in New York. My mindset has shifted with positive action steps toward productivity and creativity. My life is changing for the better here.

Yet, I dream of NYC. I sense the spiritual changes being sculpted in LA are preparing me for returning to New York a better person. I don’t want to leave LA, but I want to live in New York too. There will soon come a time when I will be fully bi-coastal – where I will live my dream of having the best of both worlds.

So, I sit and read the New York issue of The Hollywood Reporter and I live my NY life vicariously through the talent featured: Diane Sawyer looking out her CBS office at the familiar view.  Gayle King and Robin Roberts with the Manhattan Bridge (or is it the Queensboro? I’m never sure) in the background, and Larry Wilmore striking a Statue of Liberty pose with an ice cream cone as his torch – it’s all bringing me back home. All that good stuff still humming back home. Yes. Home. I’ll always call New York home. In fact, I’m going back next month.

Hopefully one day soon – I’ll be like Louis CK – living back in NYC, bundled against the cold with a smirk on my face that says, “Yup. I’m here in New York City and I belong here.”

There are two things in this picture that make my heart sink.  Robin Williams. New York.

Yes, I love Louis CK, but he’s alive and well and wonderful. This isn’t about him. He’s thankfully in the land of the living. Thankfully part of the fold that marches on despite the difficult currents.

I always equate my feelings for Manhattan as a type of love affair. When I fell in love with the idea of moving to Los Angeles, it felt as if I had betrayed New York. When I found a job in L.A. and packed up my things, bidding farewell to my upper east side apartment, it was as if I was being handed divorce papers. My heart hurt.  What New York really is – is a connection to the parents who gave me life and who eventually, through time and age, passed on.  To stay in New York knowing that profound spiritual and physical connection no longer existed, well, it was hard to bear. Mix that in with general NYC fatigue, and you have a falling out with a location in this world – one of the only places I’ve ever lived.

I’ve been a resident of Los Angeles for four years now, and I’m ready to move back into the arms of New York, or one of his five boroughs. But this time, he’s fallen in love with someone else. She’s called money. High rent. I can come back, but I’ll have to deal with money – lots of it. So, the suburbs are calling me back…back to where I was born and raised, despite visions of an apartment on Riverside Drive bouncing in my head.

One month ago, the world lost Robin Williams. I’m still reeling over this. I’m incredibly surprised at my obsession with this man – a genius whose talent was apparently fueled by pain. I’ve read fan forums and twitter feeds about how absolute strangers miss him. I’ve been a follower of his son Zak’s Twitter feed, and recently saw a heart breaking tweet about how much he misses his dad, accompanied by a photo of Robin giving blood on 9/11. “He was so good”, Zac said. The replies that followed were lovely, sharing his pain, his hurt.

Universal sentiments; however strange. His children, wives, family, personal friends –  miss him. The comment of “I miss him” is too personal – too attached to a human that only a small crowd of people were lucky to have known as a regular person.  But for those who are linking themselves in with a son who will miss his father – well, it feels close to an intrusion. It’s not like Robin was in their day to day lives, in the flesh, taking them to school, or putting them through college. He was likely not their neighbor or cycling buddy, production crew member or personal assistant. We’ll all miss him, but we’ll miss him being a part of this world. We’ll miss him on talk show interviews or new HBO specials, films and television appearances. I’ll miss new perspectives from him. I’ll even miss the frenetic, crazy comedy he blurted out when skirting questions, or trying not to connect too deeply lest one should figure out the mechanics in the brain, the hurt of the heart, the pain he held close to the vest.

What am I trying to say? I miss my dad, too. My dad was so good. I miss New York and am ready to begin the process of moving back in the next few years, ready to face a life in my home state without the constant of two humans who used to live there.

I’ve hung around plenty of comedians having befriended a few, and hanging around the Upright Citizens Brigade in New York where I studied improv. I’ve seen the darkness in which they dwell. So much so – that kept my distance for fear of falling in their well.

I will miss Robin Williams as a human being who only entered my life through film and television (sadly – I wish I had met him, although I did attend an SNL show he hosted). Mr. Williams held the key to a madness. He opened a forbidden door and walked in. Who knew his pain was so vast, so consuming? I think that’s what’s killing me