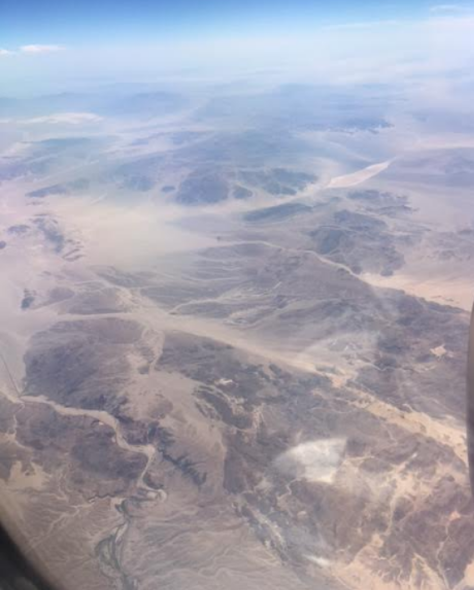 Somewhere over the California Desert

It’s not often I get a window seat on a cross country flight. As someone who deals with anxiety, I’ll take an aisle seat every time, despite having to get up for bathroom bound passengers who are trapped three seats deep. Yet, this time, on a trip from LA to NYC and back, I was booked both ways in a bulkhead window seat, happily willing to help out in the unlikely event of an emergency. Extra leg room, easy access to getting up and not crawling over people – I was sitting pretty with my own personal view of the world below.

I was amazed at what I usually miss in an aisle seat on the edge of the row, my shoulders dodging wayward hips, as my back seat neighbor uses my headrest as a handle for getting up. My view is usually of the head in front of me, or the bathroom sign illuminated in either red/occupied or green/vacant.

At the window, where the light of day illuminated the textures of landmass and hills, I was transfixed by the planet below. I’ve often felt like I’ve never belonged down there, like I’m a soul in a body experiencing a human life outside a glass bubble and all of humanity is inside. Flying at an altitude of 34,000 feet made this feeling stronger than ever.

As we floated in this long metal vessel, the feeling of detachment was profound. Up in space, half way near the Kármán Line, our feet are on the cold steel floor of the aircraft. They are not on earth. And from way on high, we can see the beauty of the planet like a work of art.

There is so much texture to the land. The deserts I watched below were patterns of dunes and cut highways, ant colonies of human beings creating inlets for their own passage from one end of the space to another. Contrast of beige sand and shadows, muted greens and dots of inclines that may be vast to the human foot, yet little nothing from above.

The desert sands of California drifted into the Grand Canyon expanse of Arizona. Deep swaths of land cut and molded into sharp layers indicating millions of years of ocean water dissipating into nothing. You can see how the dying ocean cut long lines of water marks, decreasing into lower levels until a long winding thin river bed left the last dredges of briny water.

As the arid land of the western states stretched into dark greens cut with agriculture and shiny man made circles of water for cattle, I think of how little our angry lives are down below. We are an America made of two different factions, and we are living under civil unrest in so many ways.  There are people believing things out of fear and frustration. There are others angry over being sold a bad bill of goods. There is hatred and love. There is a sense of mourning for what we have become.

But the land was so beautiful below. We are all just souls living a human life, hovering over something bigger than us. From a plane, we see the big picture from great heights and only begin to understand how little we and our problems really are.

We should all have a window seat on the world.