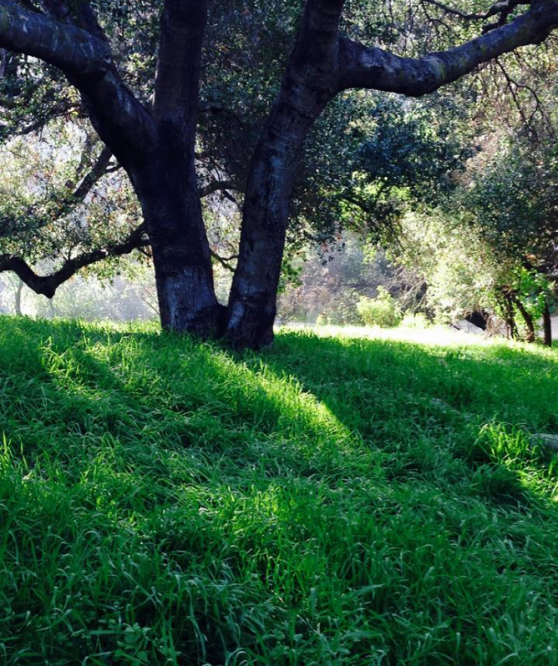 This picture was taken early last year at Bronson Canyon, a trail I usually hike with my dog Baxter. The shot was taken before the effects of the Los Angeles drought took hold. About four months later, in August of 2015, I took an (almost) mirror photo of this area, and the long blades of thick green grass had turned brown. The rolling lush hill was overgrown with dead branches. The depth of distance overturned to summer overgrowth despite the lack of moisture. 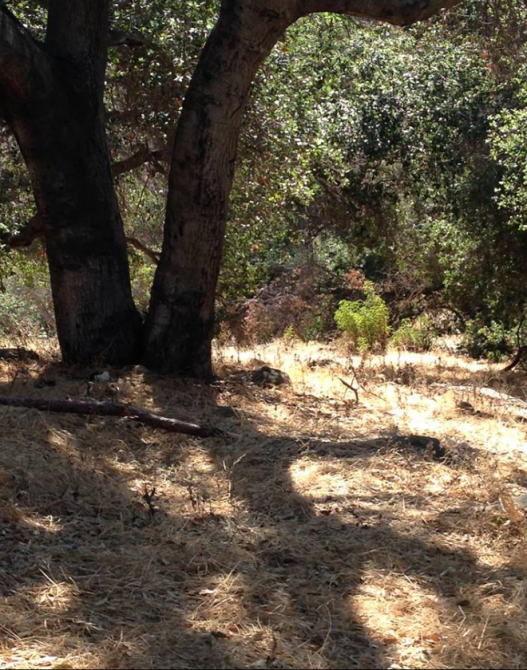 Very sad. Perhaps the latest El Nino rains have allowed this area to return to green. I haven’t been back since the “brown” photo was taken.

The hillside respite was off the beaten track from a trail where hikers were trailing and talking about their lives in great volume. Loud. Self absorbed, as we all tend to be –  perhaps some more than others –  in this Hollywood life.

In this space,  hawks fly overhead, cutting dark against the bluest skies you can image. I’ll give California it’s due. It does sky like no body else. Daytime blueness, deep with heavily wisps of clouds intermingle with curious chem trails. Night, dark blue with the largest moon I’ve ever seen sitting quietly among twinkling stars beyond atmosphere disturbance.

No wonder Woody Guthrie once described California stars and how they “hang like grapes”.

In some canyon enclaves, there is so much silence, your ears feel like there are sucked in by the pressure of it. Until the sound of a voice speaking about how their job at the hair salon sucks because someone keeps stealing their product cuts through the meditative peace.

So, that day, I left the trails that lead to the Hollywood sign, and the girls in perfectly fitting yoga attire, and shirtless men and joggers huffing behind and beyond me, and found myself in this private nook on a hill…

…across a deep trench carved out by a running stream that had long dried out.

…beyond dried brambles and  bracken padded down by ghost hiker’s feet restless to leave the conventional path.

…up the steep and grassy hill near a tree with a view of what looks like wallpaper for a Microsoft OS program.

Just me and my dog, leaving the noise of people chatting about their small problems, about themselves, about me, me, and look what this person did to me.

This area of grass and beauty, that turned brown and likely green again, is my only hope. The rest is all fluff. I’d take a snowstorm any day if I could wake up on a Chelsea NYC morning and call it my home again.

As Bob Dylan once said, “I’m going back to New York City, I do believe I’ve had enough.”

What does this photo inspire in you? Have a look. What does it provoke? Dream a little. What writing can you create from this image?

Write, write, write away. Give Monday something to brag about.

One thought on “Monday Writing Prompt”