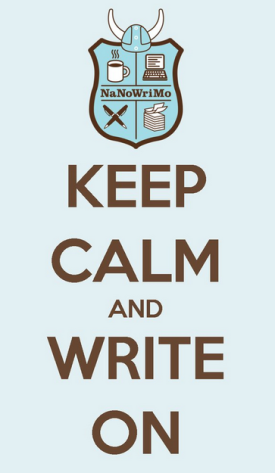 I’m participating in NaNoWriMo – National Novel Writing Month. I was doing well. I really was. The first two days of the month were write-less due to travel, but as the days carried on, I was able to start a novel and catch up – writing an average of 1660 words a day, on my way to the 50,000 words that maketh a novel.

Yet, here’s the deal: I’m stuck. I’m writing the same thing over again just to have a word count. I’m jotting ideas down, but there aren’t enough ideas to build upon. I’ve missed two days of writing, and I’m once again behind track.

It’s not that I’m not writing – it’s that I’m writing so much that it’s becoming a mishmash of the same idea written in different ways.

This is in spite of an already prepared outline.

However, I’m trying not to judge the actual writing. I am pouring out more thoughts and ideas,  putting up the big blob of clay – the mishmash of paragraphs and visuals that come pouring from my imagination. It doesn’t have to make sense right now.  Re-writes and editing is what chisels down the story into the form we  view with the human eye and transforms words into visuals of story. I’m just frustrated with the days that are unproductive.

Undertaking this challenge reminds me a bit of my old Track and Cross Country days in high school. I was determined to tackle the sport of running. Something about it terrified me – standing at the starting blocks, hearing the gun, running my slow ass off – that made me want to do it.  I also loved how running made me feel. The freedom. The effects of good fitness.  The fact I did not have a runners body or form did not deter me.

I came in last on all the events I participated in. Yet, in the end,  I finished them. All of them. There was one time in a Cross Country race when my body grew weak from over training and lack of food. (I was a silly teenager who thought a bottle of water was lunch).  I walked it in –  in tears.  I wasn’t just physically tired, I was emotionally tired of being so determined and dedicated to a sport where I busted my body everyday yet came in last every race while my team mates, who had finished earlier and already had their pants on, cheered for me. Call it pity, but it was really annoying to keep losing when I worked so hard (but not intelligently).

Despite the challenge of writing a book in a month – just finishing is the goal. If it’s not on November 30th, but rather on December 10th – then so be it. At least it’s done. At least the  mound of clay is there to be formed into a story.

So what if you’re team mates have walked through the finish line, pulled on their track pants and gone home. This is your personal challenge.

We’re all individuals just trying to add something good in this world.

2 thoughts on “NaNoWriMo Half Way Point”