How’s the afterlife? Are you around seeing this? The Mets are about to clinch the NL East for the first time in nine years. We’re not sure exactly when, but their magic number is one. You heard me. It’s not a tragic number this year. It’s magic. Just wanted know if you’re watching.

Yes, they still make some bone headed moves, and sometimes their bats stall like an old van on the parkway – but their pitching is phenomenal. This kid, Noah Syndergaard just pitched a gem into the 8th inning. 100 pitches. He struck out 14 guys and pitched a shut out until he gave up a homerun.  And…you guessed it. The bullpen came in and started giving away  hits to Cincinnati like it was Christmas. Up until then, the Reds were losing 0-12 against our guys. But bring in the relievers and it was like seeing Santa and his reindeer in the sky.

This is when you used to see me leave the room and say, “Screw it…even with a 12 run lead, they’re gonna blow it.”  And you’d laugh and say, “Man, you are a true Mets fan.  Come back here!”

I wouldn’t come back until I heard you clap and say “They won!”

Well, I’m not doing that anymore. This team still makes me wobbly, but they give me reason to stick around. There’s the offense: There’s a healthy David Wright coming in clutch. Daniel Murphy is hitting doubles, Curtis Granderson, Lucas Duda and Yoenis Cespedes coming through again and again. We have aces like Noah (aka Thor), DeGrom, and Harvey (who has pissed us off lately due to his diva ways.) Despite the bullpen weakness the Mets still won – 12 to 5. 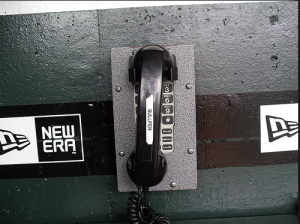 If there could only be a bullpen phone line to you to talk about how this all happened – how at this time of the year we’re talking about next year as the Mets pack it in for the winter.

Can you believe it Dad?  They may not make it all the way, but they actually have a shot. They could reach the World Series. I won’t hold my breath, but ain’t it amazin’? I wish I was home in NY with you in the living room watching it all.

So, wherever you are, I hope you’re seeing this.