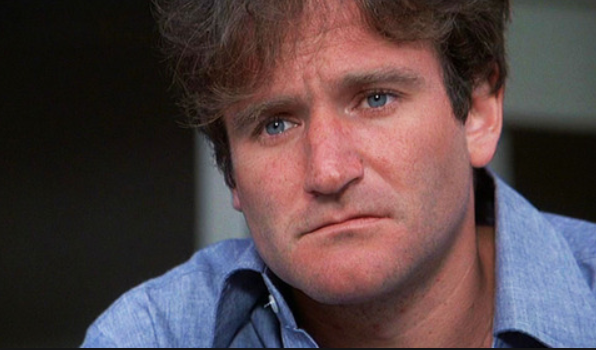 Robin Williams as T.S. Garp in “The World According to Garp” (Warner Bros)

Perhaps the screenshot above is another obsessive motion on my love for Robin Williams. But as my previous post states, I re-watched the film “The World According to Garp” over the weekend, and was reminded of the strange wonderment of this unique story.

The photo above is a moment in the film when Garp is staring into the Long Island Sound. He has just said goodbye to his mother for what turns out to be the last time.  Although he didn’t know she would be shot dead by a crazed assassin, he knew something was going to go wrong. Yet, intermixed with this far away thought, is the far away stare of a writer, who longs to capture the emotions and veracity of the moment.

Much like the anger and frustration T.S. Garp felt when his books didn’t match cultural phenomenon proportions like his mother’s publication, “Sexual Suspect”, the futility of writing pervades the mind of an author, especially one who is about to debut their first book – their first self published book. Yikes!

Today, we writers look at J.K. Rowling, or E.L James who started off as unknowns with a great idea for a book that somehow hits the imagination of a populace.  And we hope, as we write our dreamy little dreamy stories, we’ll find the same success. Yet, our rational brains tend to tell us to calm the “f” down. Be detached from the results of your work. Start the next project wishing and blessing the soon-to-be-published work the best. Onward, upward.  And you know what? I think that works well.

So, today, as rain hits southern California, I have the long stare of Garp, looking into the abyss, sensing that something could go wrong, but knowing that everything will be alright.

One thought on “The One Thousand Yard Stare of a Writer”