Lauren Hill and her team after a big win.

There was a tear jerking segment on yesterday’s CBS Sunday Morning reported by human-interest journalist Steve Hartman. It was part of an ongoing update on the latest news of  Mt. St. Joseph University freshman Lauren Hill. Lauren is a star basketball player who has terminal brain cancer.  She has not missed a practice or game, despite her worsening condition – determined to play until it’s absolutely impossible. Last week, when she placed the winning shot against The Hiram Tigers, something amazing happened: The losing team cheered. It’s quite a beautiful story about a wonderful young lady, and how those who lose gracefully can be the biggest winners of all.

It got me thinking about my days in school, when I competed in high school track and cross country.

I wasn’t a great runner, but I was addicted to my daily runs around town and on our school track –  an addiction that would last decades, until age and injury slowed it down.  The terror of the starting line made my adrenaline crackle. The run itself was a thrill. Crossing the line was euphoric. The only thing was – when I crossed the finish line – I always…despite showing up each day for practice and running miles on weekends…always came in last. Sometimes so last, people would have to wait until I finished. I was in great shape. I had a decent pace and gait. I was trim. But I did not have a light runner’s body, and sprite muscles.

Despite all that work…. last. Did it bother me? Yes. Sometimes I’d finish with tears in my eyes. Did it deter me? Never. Just finishing made me feel great in some profound way. But, it’s difficult to put so much work into something you love, only to have nothing to show for your team. 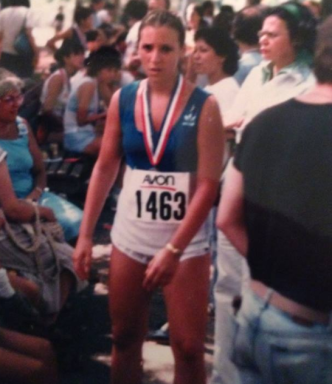 I used to run the 880 yard dash and the 2 Mile relay in spring track.  Despite earning  “Most Improved” on winter track a few months before, I still lumbered in last during meets in spring. But there were some interesting lessons on winning and losing in between the frustration.

Our girls spring track team was undefeated for the first month of meets. We embarked on a meet with our rivals, Eastchester High School, who were also undefeated. So, you can imagine – someone would lose that mantel by the end of the day.

Well, it was us. We lost out to some really fast runners and a few strong field event girls whose size and girth could place a shot-put through your head.

We boarded our team bus nonplussed. A little disappointed, perhaps, but we were laughing at our team mate Becky, who went on about how one of the Eastchester girls reminded her of her dad. (Okay, it’s not nice, I know. But this particular opponent wasn’t very nice.)

Our laughter made our Coach- Mr. Galanka – stand and address us. Uh oh. What did we do?

Actually – we did good. He told us how proud he was of us. The fact that we were laughing and enjoying each other after a disappointing loss exemplified our strong character. He said that we should always remember this in life. And that as strong young woman, we should never define ourselves with superficial things like hair do’s and nails and clothes. That our character in the face of losing is what matters.

What a guy. It was the most meaningful moment of my life – even today.

Yet, Coach Galanka wasn’t done teaching lessons. A few weeks later, we were at home, running against an all girls parochial school – St. Ursula Academy –  a team that was beating us on our own track.

Galanka came to me to prep me for the 2 Mile Relay (which is an 880 yard dash for each of the 4 members of the relay team).  Apparently, he wanted me to be 4th in the heat. If you know relays – usually the fastest person is 4th, because that’s the last runner who brings it all home in the final stretch. I though he was mad. Insane.

“Because I know you can do it,” he assured me.

“Yes we will – if you don’t finish this race for us. But I have faith that you can do this,” he said.

I though he was crazy. This must be a joke. My heart was beating in my throat. I thought I was gonna hurl my pre-game Snicker’s bar, eaten ritually before a track meet.

The race began.  My fellow relay runners were KICKING IT!  They worked up a very wide lead, and by the time it was my turn to grab the baton, Ursula was more than half a lap behind us.  It didn’t quell my nerves, but I was ready for my leg as the baton was handed to me – literally.

As I ran the first 440 yards, I gained on the Ursula Academy girl who was in the 3rd leg of their relay team – until I ended up passing her. (Remember, I’m in the 4th of mine). Oh my God… I lapped her! We were now one full lap ahead. I finished the relay – and we won as the Ursula team continued to run out their last lap minutes later.

We won. WE WON! My team was amazing. They created that amazing lead, and I was there… to bring it home. (A big cosmic ‘thank you’ to them.)

Coach Galanka came over to me and said, “I knew you could do it. See? Don’t ever doubt yourself. I did that on purpose. I wanted you to see how you can test yourself.”

I’ll never forget him or that moment. Today, he’s an award winning assistant football coach and woman’s track coach at Fordham University in the Bronx, NY, where he leads young athletes to titles and championships. Lucky bastards.

Yes, he’s one of those coaches – one of those teachers whom you never forget. They teach you lessons in life – like how to be a good loser – how to allow someone to see for themselves that hey can do anything, given the determination and love of the sport.

Much like Lauren Hill and the ladies from the Hiram Tigers – it’s not the winning that’s important – it’s how you lose.