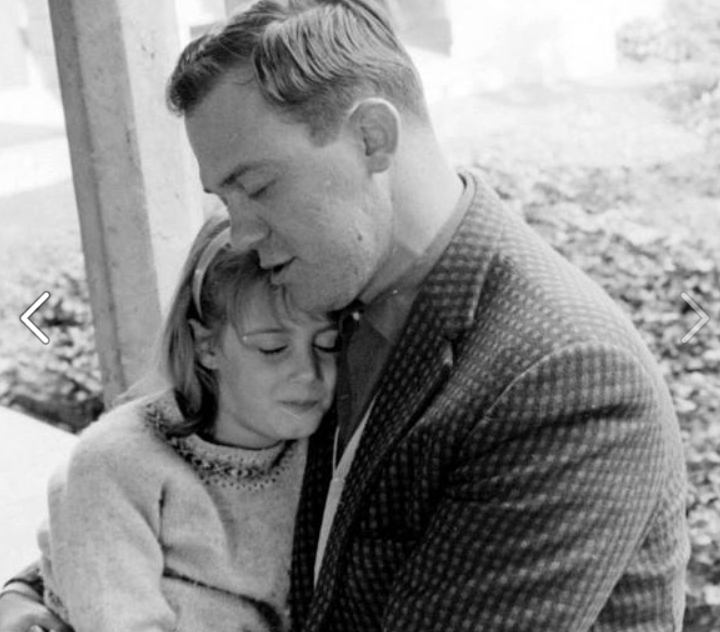 “I even remember the day . He made me feel so special and loved. I always knew he cared. And in a world where most of the adults were worried about their own shit, I always felt like my uncle was always there.”

This is a photo of my soon-to-be-father and my cousin Michele, taken in the spring of 1961. The quote above is from her. This picture happened before he met my mother, and obviously, before I was born. The photo was shot by my uncle Charles, his brother, on an afternoon outing in area known as the Cloisters, located along the cliffs of the Hudson, north of Manhattan.

The moments in between grief are consumed with every day, ordinary matters. Thoughts fly, and responsibilities keep you grounded to the day to day. But the moment your sorrow invites itself into your room and interrupts your denial, and shakes you by the shoulders to remind you of the space in your heart, all breathing stops. The heart sinks.

I discovered this photo for the first time in my life, several months after my father died. It was an ordinary evening, during one of those moments in between grief. The TV was on, dinner was finished, thoughts and plans for tomorrow occupied my mind. My uncle, who was also handling the anguish of losing his big brother, sent me this photo of my young father holding my cousin. All at once, the waves of sadness and resignation that came and went in the recent months, culminated into a tidal wave of heartbreak. It came crashing while I wasn’t looking. It slapped me down and held me there, as I gasped for breath between tears and heavy heart. It had been fine for a while after my father left this world. But each day since, the waves grew bigger and louder until the moment I saw this photo, of my young, single dad-to-be, full of love for a hurting niece, with a whole life of love, sadness, pride, happiness, anger, sadness, fury, resignation and beauty before him. The years drained away until he grew old and ill. His last days alone, likely thinking of the young man he once was, and the old man he had become.

My father was a child of the holocaust, escaping capture by the Nazis thanks to the Catholic church who took him and his brother into their orphange. They were hidden children. When he came to America, he became the all American man. He made his way through New York University by waiting tables and taking odd jobs. He served in the Army during the Korean conflict, but never saw a day of combat. He became a manager at IBM and remained there for thirty five years. He married my mother, and they had me. Only me.